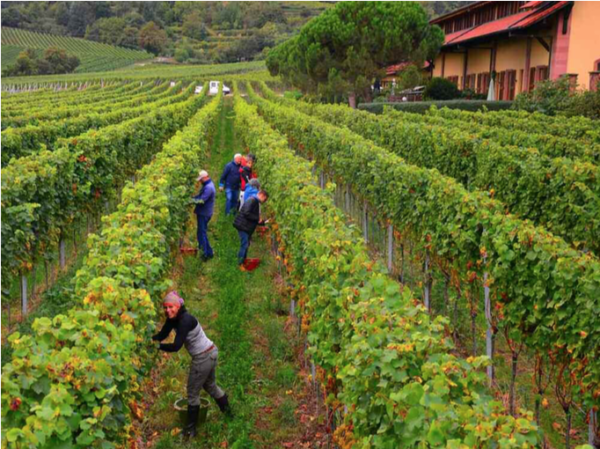 A year of endless rain finally turns around: The 2016 harvest at Villa Wolf in the Pfalz

WACHENHEIM/WEINSTRASSE, GERMANY — “The rain started in early spring and just kept coming down,” said Sumi Gebauer, who manages the vineyards and winemaking at Villa Wolf together with her partner, Patrick Möllendorf. That cool, wet weather kept Sumi and Patrick quite busy as they worked endlessly to protect the vines as much as possible throughout the growing season. Sunny, hot weather finally arrived in August, bringing a happy conclusion to a challenging, labor-intensive vintage.

The Pfalz region lies along the Rhine river valley in southwestern Germany, just north of Alsace. This area is typically the warmest and driest in Germany, but in 2016 the Pfalz had a cool, wet spring, similar to the Mosel, that delayed flowering and caused uneven fruit development. And the rain continued without a break until August. “The biggest difficulty was finding a dry window between rain storms in order to do our vineyard work,” says Sumi. “Even finding the right time to plant our cover crops was a challenge!”

With the wet conditions, we expected to have a rushed harvest in order to get everything in the cellar as fast as possible. But record-setting heat in August dried the overly saturated vineyards quickly and the final ripening proceeded at a steady pace. Very cooperative weather continued into September, allowing us to harvest in an orderly way, without being in a huge rush. We started the harvest with the Pinot Gris on September 21. In October, the weather turned cooler, but stayed dry, so we were able to keep the Riesling in our grand cru Forster Pechstein hanging until October 30. It was the last vineyard that we harvested and the fruit was beautifully ripe and healthy.

The one positive thing we can say about the cold, rainy spring and summer was that it helped the new Spätburgunder (Pinot Noir) vines that we planted in our monopole Wachenheimer Belz, where we have limestone soil. In 2013 we took out one-third of the aging Riesling vines in the one-hectare (2.47 acre) Belz vineyard. The cleared parcel was left fallow until 2015, when we planted it with a low-yielding Freiburg clone of Spätburgunder. That was a very dry year, so the young vines got off to a slow start but benefited from the extra rain this year.

In the end, the fruit we harvested was clean and healthy, with must weights from 85–95° Oechsle (20.5–22.7 Brix). Despite the frustrating growing season, we are quite happy with the harvest here in the Pfalz. The yields and the quality of the fruit were better than expected, so we are truly excited about what we have in the cellar.

Download the Villa Wolf harvest report as a PDF