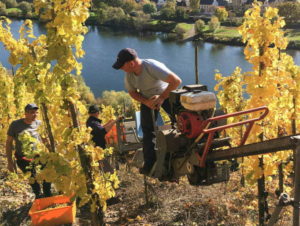 Saved by a surprising September: The 2016 harvest at Dr. Loosen

BERNKASTEL/MOSEL, GERMANY — “September saved our ass!” says Ernst Loosen, owner of Dr. Loosen and Villa Wolf. “We had no summer, and a lot of rain all year, so we thought the harvest would be a total disaster. But then beautiful weather arrived in September, giving us an excellent but unusual harvest. It’s a miracle that it worked out!”

Germany experienced an extraordinarily wet and cool year in  2016. By the end of June we had already seen as much rainfall as  we normally get in a whole year. The cool, wet weather delayed  the flowering and caused it to take longer than usual, which led  to very uneven ripening. And without the warm and sunny  weather that finally arrived in September, much of it would not  have ripened at all. It was the warmest September since weather  records were first recorded, in 1876, and it was very dry. We were even starting to worry about water stress in our well-drained slate-soil vineyards, which was quite ironic given the heavy rainfall in spring and summer.

The fruit ripened beautifully in September and we were able to start the harvest on the 4th of October, finishing on November 5. Very good weather continued through October, with only a little bit of rain, so we had a relatively relaxed pace during the harvest. That was quite helpful because it gave us the time we needed to do the extensive selection that was needed because of the uneven ripening.

The great selection challenge of 2016 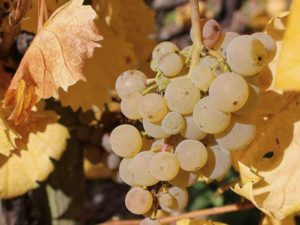 The biggest difficulty of this vintage (other than the agony of worrying that it was going to be a complete washout) was deciding how to handle the selection process. It is normal for us to select the healthy fruit from any botrytis-affected fruit in order to produce the different Prädikat levels — we do that every year. But our selection process is now complicated by the fact that we are producing more and more dry wines, which require fully ripe, healthy fruit, unaffected by botrytis.

In 2016 we had the unusual situation where some clusters were nicely ripe for harvesting our Grosses Gewächs (GG) dry wines, but others were only ripe enough for the lighter Kabinett wines, and still others needed more hang time. This inconsistency in ripening was the most extreme we have ever seen. The Grosse Lage (grand cru) sites really showed why they deserve that classification because they achieved full ripeness much sooner than the cooler villages sites higher up the slope. But every vineyard had remarkable variations in ripening, even between clusters on the same vine. How do you deal with such variability?

Our solution was to make multiple passes through each vineyard in order to harvest optimally ripe clusters for each style and quality level. On our first pass, we would take the second cluster (farthest from the cane) from each shoot. The clusters that were more shaded and still greenish in color were separated into a picking bucket for Kabinett. Yellow clusters that had better sun exposure, no botrytis, and about five degrees of Oechsle (1.3 Brix) more ripeness, went into another bucket for the GG dry wines. We left the first clusters (closest to the cane) to hang longer, coming back a week or so later to harvest them for GG or Spätlese. We were mostly able to do this with two passes through each parcel, but in some cases had to make three separate passes.

This hyper-rigorous selection process was a lot of work, but was worth the effort. In a vintage like this, you can’t get the quality you want without doing strict selections. It was a little easier in the past, when we primarily produced fruity Prädikat wines, where you’re looking for a certain average ripeness, and a  little bit of botrytis is ok. But the new generation of dry wines requires a meticulous selection of only fully ripened clusters that have no botrytis. 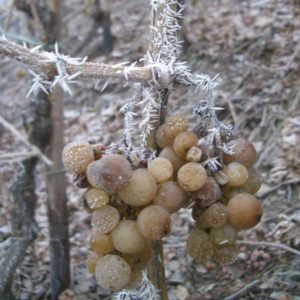 We are thrilled to report that we were able to harvest some Eiswein for the first time since 2012. The temperature dropped to –10° Celsius on November 30, so we went out at 5:00 a.m. with a crew of 58 pickers, including everyone from the office and winery. Our thanks to them for volunteering to leave their warm and cozy desks to help with the harvest! It was the earliest Eiswein harvest since 1983 and we brought in a good amount of estate Eiswein from our villages vineyards, as well as a small amount from our Grosse Lage (grand cru) Ürziger Würzgarten vineyard. The fruit was still very healthy and perfectly frozen, so we are looking forward to tasting some beautiful wines.

This was a year that showed very clearly that it’s never over until it’s over. Our vintages are still quite unpredictable and even with the general trend of climate change we continue to have years where achieving full ripeness is by no means guaranteed. You have to remain steadfast and do the work necessary to make the most of what nature gives you. We are happy and relieved that September saved us. It’s too early say anything meaningful about the wines, many of which are still fermenting. But they already show intense aromatics and we are very optimistic about the wines that will end up in the bottle. The yields were better than expected, as well, so overall we are quite happy with the 2016 vintage.